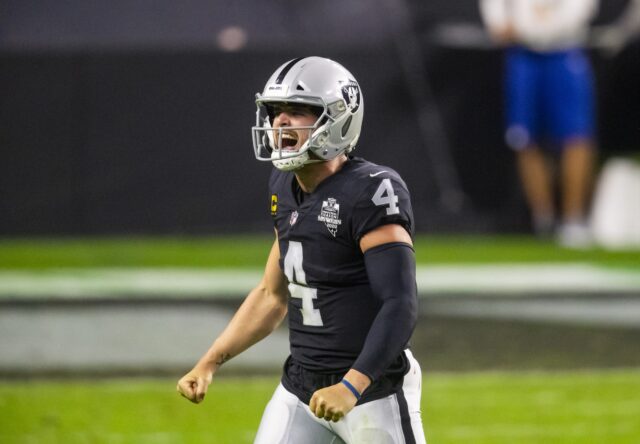 The 2021 season is finally just around the corner as the first preseason game is in the books. The new-look Las Vegas Raiders take the field at Allegiant Stadium for the first time in preseason on Aug. 14 when they go against the Seattle Seahawks.

The offense should pick up where it left off last season with Derek Carr manning things under center again. Despite some rumors that the Raiders could trade for a marquee quarterback, the franchise remains committed to Carr, as evidenced by the recent reports of the two sides negotiating a contract extension.

While the offense should be fine, all eyes will be on the defense as Gus Bradley looks to turn around a unit that has the team back in recent years. However, the early returns look promising, and Carr himself is excited about what they can do this year.

“Absolutely. It’s competitive now,” Carr said. “These are live game reps, so I’m trying to give credit to what they are doing. These are tough reps. Every rep is a mental gymnastics. Every rep is tight coverage. It’s competitive, and so that’s only making us better as an offense. And it’s definitely making the defense better with all the weapons we have. We roll the ones out there; we got these weapons. We roll our twos out there, we roll our threes out there, there is still guys that have caught touchdowns in the NFL, caught balls from me in games in the three’s. So, it’s super competitive. Guys like Casey Hayward, Yannick [Ngakoue]; those guys that we added, even [Nick] Kwiatkoski we added last year, you see these veterans leading and pushing that competitiveness and it’s really a beautiful thing man. It excites me. I’m trying to stay here, but it’s exciting to watch.”

The overall optimism surrounding this year’s defense is encouraging given how poor that side of the field has been for Las Vegas, and so far, it looks like they are making Carr and the offense work. Hopefully, this is a sign of things to come for the rest of the league because the Silver and Black are clearly starved for a playoff berth.