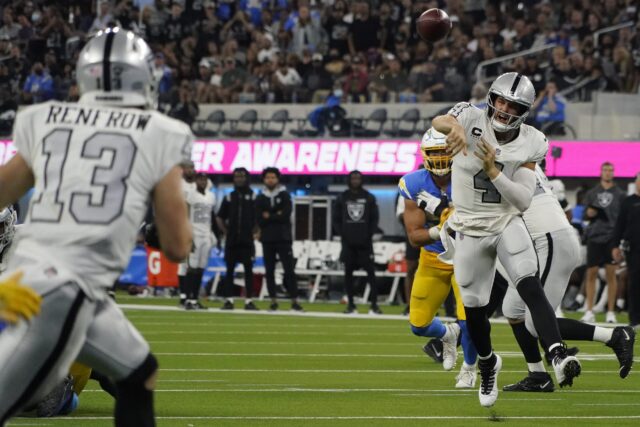 The Las Vegas Raiders have made it a point this offseason to lock in those players whom they view as paramount to the future of this team. Quarterback David Carr and pass rusher Maxx Crosby both signed big extensions, as did new receiver Davante Adams after being dealt over from the Green Bay Packers and the latest to be locked in was receiver Hunter Renfrow.

The fifth-round pick out of Clemson in 2019, Renfrow has quickly grown into one of the most reliable receivers in the NFL and was named to his first Pro Bowl after finishing with 103 catches for 1,038 yards and nine touchdowns. He was rewarded with a two-year, $32 million extension with $21 million guaranteed.

The new deal was well-deserved, and his teammates are extremely happy for the young receiver. Quarterback David Carr spoke about being proud of Renfrow and believes he will do good things with the money, via Aidan Champion of Sports Illustrated:

“I’m so proud of him,” Carr said of Renfrow. “He worked for it, he earned it. He works extremely hard and [I’m] happy for his family, wife, and daughter. That’s life-changing things that he probably didn’t even think of when he was a kid. But now, he’s probably just blown away.

“And I’m so happy for him. He deserves every penny because I know he’s like a lot of people I know — he’s gonna do a lot of good things with that money and help a lot of people.”

What is extremely promising about this Raiders’ core is that they all seem very close already. Carr, Renfrow, Adams, and Waller all seem to be on the same page and are happy for each other’s success.

Carr would continue on about the new deals signed by him and his Raiders teammates, even noting that everyone structured their deals in a way to make it easier for the Raiders to retain everyone:

“I’m happy for him, I’m excited, and that’s why Davante [Adams], Maxx [Crosby], myself — that’s why we did our contracts in certain ways so that we could get everybody to stay.”

With this core of players, the Raiders have the potential to be one of the most explosive and potent offenses in the entire NFL. And the front office has made sure to lock them in, allowing them to grow even better together over the next few seasons.