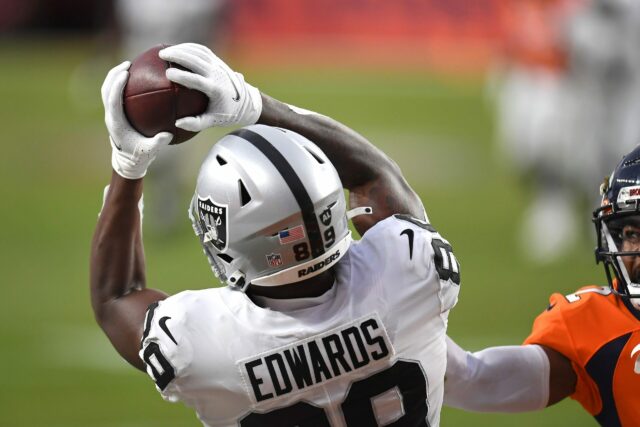 Las Vegas Raiders quarterback Derek Carr is confident he will have no shortage of weapons in the receiving corps between Darren Waller, Henry Ruggs and Bryan Edwards.

Of course, this has not prevented Carr from fantasizing at the prospect of reuniting with Green Bay Packers wide receiver Davante Adams. It is difficult to blame him, given Adams’ status as arguably the best wideout in the NFL.

Not only that, Carr’s connection with Adams spans back to their days as teammates at Fresno State. Although the Raiders will likely have to wait until the latter’s time in Green Bay officially comes to an end, the next best option could already be in Las Vegas.

Carr shared some rather high praise for Edwards and his similarities to Adams during their college days, via ESPN’s Paul Gutierrez:

#Raiders QB Derek Carr says Bryan Edwards reminds him of Davante Adams, when he joined him at Fresno State. “they way he can move in the air, body control, is impressive.”

While it may be far too early for any comparisons to a player of Adams’ caliber, Carr’s comments are indicative of the promise that Edwards has shown this offseason.

Despite a shortened offseason due to the coronavirus (COVID-19) pandemic last year, the former third-round pick still generated some hype as a potential steal with a strong outing in training camp. Unfortunately, he struggled to find his footing during an injury-riddled rookie campaign and admits it was a frustrating start to his career.

The comparison to Adams’ skill set may not be too far-fetched given Edwards’ 6-3, 212-pound frame and ability to make acrobatic catches. The only challenge now is finding a way to make it translate to the next level.

Edwards is hardly the only player from his draft class that fell short of expectations as a rookie. The emergence of first-rounders like Ruggs and cornerback Damon Arnette will be pivotal in their quest for a playoff berth.

Even if Carr may be keeping tabs on Adams’ situation in the near future, Edwards will have an opportunity to establish himself as a viable contingency option.