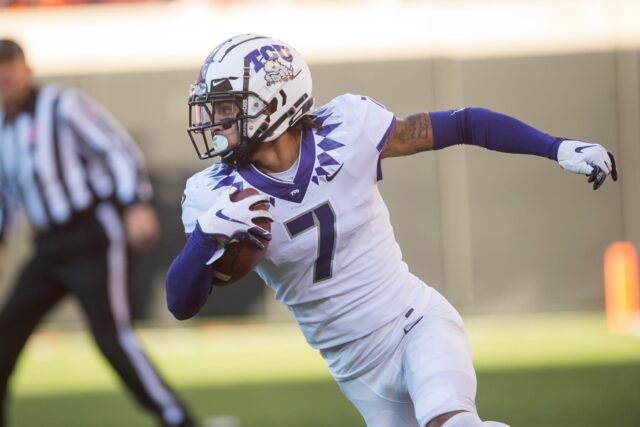 The Las Vegas Raiders put the finishing touches on their revamped secondary with the addition of Trevon Moehrig this offseason.

Despite being regarded as the best safety in the 2020 NFL Draft, Moehrig somehow slipped to the Raiders in the second round with the No. 43 pick. It appears he has since wasted no time making his presence felt in training camp.

The team’s official Twitter even posted an impressive pass deflection on an attempt from quarterback Derek Carr to wide receiver Hunter Renfrow.

It seems the play by Moehrig stuck out to Carr after he offered up some high praise for the rookie, via ESPN’s Paul Gutierrez:

“This guy can actually cover.” – Carr, on Moehrig. “I want him to do that to Mahomes.”

Carr’s praise of Moehrig is certainly well-deserved given Renfrow’s status as the team’s go-to option in the slot. However, while it may seem like a mismatch in coverage for most safeties, the rookie managed to step up to the challenge.

Aside from cornerback Casey Hayward, the key players in this secondary are still in the early stages of their careers. This has spurred Moehrig to embrace taking on a potential leadership role over the top of the defense.

The 21-year-old is doing what he can to show merit to his goals this offseason. This could prove to be the kind of spark that safety Johnathan Abram and cornerback Damon Arnette need to take that next step in their development.

For now, it is encouraging to see that Moehrig’s efforts are giving Carr and the offense a good look so far in training camp. This will surely pay some major dividends when the time comes for this defense to contain a high-powered offense like the ones the Kansas City Chiefs and Los Angeles Chargers have built.

After all, the Raiders will be relying heavily on their crop of young talent to impact the 2021 NFL season immediately.