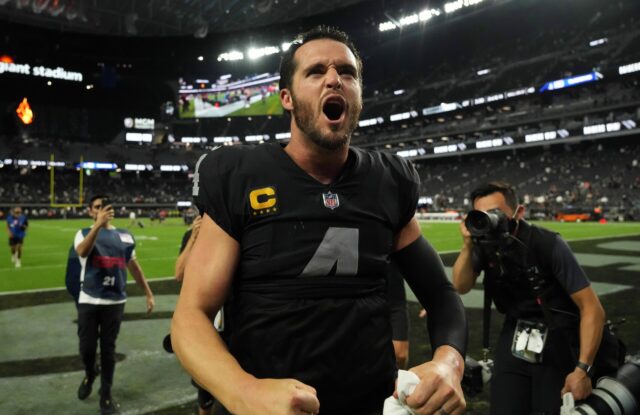 The Las Vegas Raiders could not have gotten off to a better start to the 2021 season as they are undefeated through three weeks and are tied with the Denver Broncos for first in the AFC West.

The Raiders have already endured some dramatic finishes, winning an overtime thriller against the Baltimore Ravens in Week 1 and recently fending off a pesky Miami Dolphins squad in Week 3.

Their Week 2 win against the Pittsburgh Steelers was also impressive as they played on the road on a short week and showed they were the better team throughout the afternoon.

All the talk and optimism in Las Vegas looks like it was not just for show given how they have looked so far and in the process, they managed to make NFL history via CBS:

The Raiders are the first team in NFL history to start 3-0 with each of their wins coming against a team that won 10+ games the year before.

They’re 3-0 for the first time since 2002, the season they went to the Super Bowl and Rich Gannon won MVP. pic.twitter.com/RK3WyLtE1E

The Ravens, Steelers, and Dolphins were all considered likely playoff teams heading into the year, so for the Raiders to beat all three consecutively speaks volumes to where they are compared to previous seasons. Granted, each team they faced was dealing with their fair share of injuries, but Las Vegas can only play the opponent in front of them, and they showed they should be taken more seriously going forward.

Derek Carr has played like an MVP candidate, while the defense is doing just enough for them to hold on down the stretch. It remains to be seen whether or not they can keep this up, but so far, they are definitely exceeding expectations.