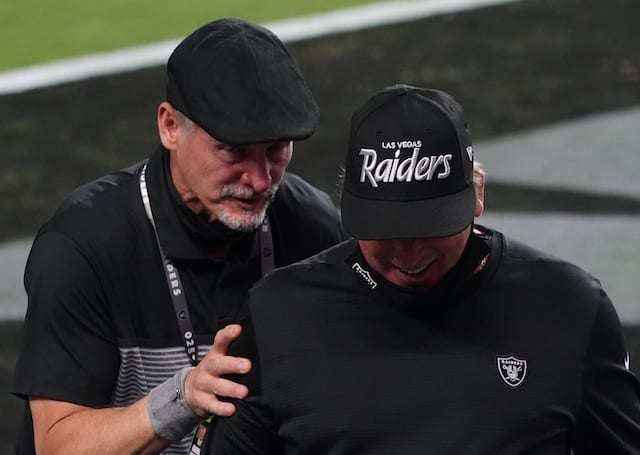 Like the rest of the NFL, the Las Vegas Raiders are gearing up for the 2021 season, and so far, the team has looked good in preseason action.

The Raiders picked up a narrow victory over the Los Angeles Rams in their second game of the summer and looked like they will be one of the most improved teams during the year. However, there is still plenty of work to be done in the next couple of weeks, including who makes the final 53-man roster.

As per the rules, Las Vegas needed to make the next set of cuts to meet the 80-man roster limit at this point of the offseason, so the team announced they waived wide receiver Marcell Ateman, defensive tackle Darius Stills, and linebacker Darron Lee. Ateman and Stills were logical cuts as the Raiders boast plenty of depth in those areas, while Lee was placed on injured reserve.

The Raiders have waived WR Marcell Ateman, DT Darius Stills and LB Darron Lee to get the roster down to 80 players.

Ateman was a former seventh-round pick by Las Vegas in 2018 and appeared in 18 regular-season games, recording 20 receptions for 270 yards and one touchdown. The receiver had another two receptions for 45 yards and a touchdown against the Rams but could not make the team given they already have players like Henry Ruggs, Bryan Edwards, John Brown, and Willie Snead.

He still was an undrafted rookie who signed with Las Vegas and appeared against the Rams and was listed as waived/injured, meaning other teams have the option to claim him before he ends up back with the Raiders. If he does return, Las Vegas can either reach an injury settlement or place him on injured reserve.

As for Lee, being placed on the injured reserve is likely to indicate that the team intends to keep him for the upcoming season. The linebacker corps is a bit thin right now as Nicholas Morrow and Javin White are dealing with injuries of their own, so it will be interesting to see if the Silver and Black decide to add anyone.