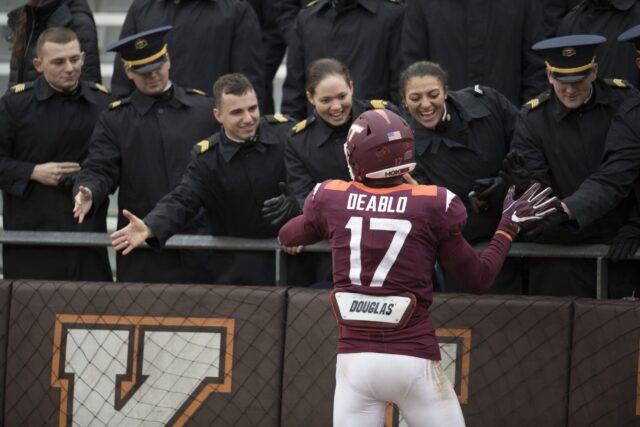 The Las Vegas Raiders announced they have signed rookie linebacker Divine Deablo after taking him in the third round of the 2021 NFL Draft.

Deablo is an intriguing prospect for the Raiders thanks to his versatility playing linebacker and safety while at Virginia Tech. At 6-foot-3, 226-pounds, it appears they have decided on what position he will be getting reps at once training camp begins.

Deablo started in 39 out of 51 games for the Hokies, tallying up 206 tackles (117 solo), six interceptions, 17 passes defensed, and three forced fumbles during his career. He earned first-team All-ACC honors by registering 55 tackles, four interceptions and one fumble recovery as a senior.

The 22-year-old revealed that he models his game most after Seattle Seahawks legend Kam chancellor. It is easy to see why considering the similarities in their play style and physical tools.

Debalo’s experience in coverage should help pay some dividends for his transition to full-time linebacker. It will also allow for some flexibility for new defensive coordinator Gus Bradley to utilize this season.

It is no secret that the linebacker corps was largely underwhelming despite notable names like Cory Littleton and Nick Kwiatkoski in free agency. Las Vegas is hoping the new youthful additions can help provide a much-needed spark on the edge.

Deablo seems to be in the midst of a full-blown switch to weak-side linebacker, where his mobility can be better utilized in passing situations. It will be interesting to see if he can make his presence felt by etching out a potential role in the rotation and on special teams.

Now that the Raiders have signed fellow third-round pick and linebacker Malcolm Koonce, the 2021 draft class is now officially in the books. Every rookie pick signed four-year deals with the exception of Leatherwood, who also has a fifth-year option.