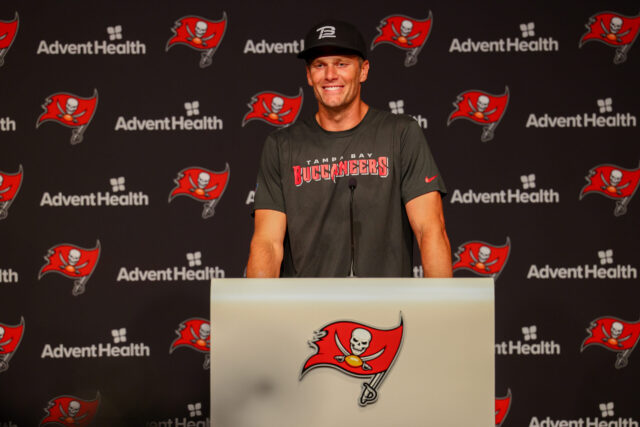 In just three seasons, Maxx Crosby has gone from a fourth-round draft pick to an All-Pro defensive end and a cornerstone of the Las Vegas Raiders franchise. The team rewarded Crosby with a four-year, $94 million contract extension this offseason, ensuring he will be with the team for the foreseeable future.

Now the pressure will be even more on Crosby as he is currently the second-highest paid defensive end in the NFL. But Crosby has been working hard to ensure his play does not dip at all and spoke about taking an approach similar to that of Tampa Bay Buccaneers quarterback Tom Brady, via Levi Damien of Raiders Wire.

“I have a teammate, Duron [Harmon] who was telling me about it and I’m asking him like, how does [Tom] Brady work and what are the things he does that’s been able to do it for so long?” said Crosby. “And he said when he first got to New England, Brady told him, ‘There’s no such thing as an offseason.’

“So, for me, that’s kind of been my approach is just no matter what, even after the Bengals game, still for me it was like, okay, there’s a lot of guys that go on vacation for a month and eat whatever and then you have to cut weight and do that. Like for me, I was still doing my normal routine, still meal prep and still doing that because that’s what the great ones do.”

For someone aiming to be amongst the greats, the offseason preparation is just as important and leads to the on-field success. That is what separates the good players from the great and that is where Crosby expects to be.

But it is also about more than his individual performance as he believes this work ethic will rub off on the younger players, which will help the Raiders as a whole:

“So, for me, if I do that and show the younger guys that I’m doing this and if I can do it and I’ve had success, I’ve got a second deal and things like that. If I can show a guy who’s in his first or second year like this is what it’s supposed to be like and inspire others to do it, I feel like it’s going to help the team. So, to answer your question, I don’t really think there’s an offseason when you’re trying to be the best at what you do.”

It is this mindset that is why Crosby is viewed so highly and as such an important part of the Raiders’ foundation in the present and future. It is one thing for a player to want to be great, but also to look to help the younger players shows he is a player worth keeping around.

With Chandler Jones being added on the opposite side, more opportunities should open up for Crosby to continue to wreak havoc on the opposition, and with the work he has put in this offseason, he will be ready to take advantage.