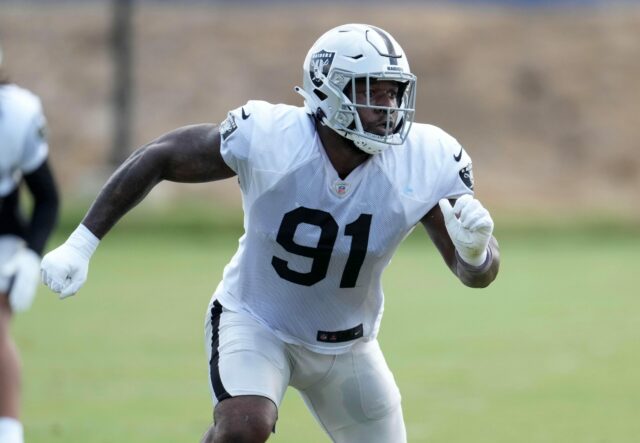 Even though the Las Vegas Raiders are coming off a loss, they have to feel good about how their defense has looked so far during the 2021 season.

Defensive coordinator Gus Bradley has done an excellent job with the defense, but most of the credit has to go to their defensive line. The d-line has been able to win in the trenches, pressure opposing quarterbacks, and Yannick Ngakoue has been a big part of that.

Ngakoue has come alive the past couple of weeks with four sacks in their past two games, and interim head coach Rich Bisaccia attributed his success to getting in good practices.

“Well, I think the first thing is the last two weeks he’s been able to practice all week,” Bisaccia said. “He hasn’t missed any days of practice and we’ve been in pads on Wednesday, which we’ve really had some grind out practices. And again, I think again he’s in competition not only with himself but with Maxx [Crosby]. And with Solomon [Thomas] and with Q [Quinton Jefferson] and those guys that are out there, and with Carl [Nassib] in the way in which they practice. It starts with their individual drills, and it works its way pad level wise into what we call pods and then works its way into unit and then team.

“And again, now I think we are seeing the fruition of some of that coming through in the game. And a lot of the chips sometimes are going Maxx’s way a little bit. He had some success early. They are setting protection a little bit to the other side, and he’s had some fortune over there to go against some of the one-on-ones. But he’s obviously been playing well. He’s been playing at a really high-level speed-wise as well and been in a position to help us. He’s done it the last few games, but it was big in that game, especially getting it on the 30 (yard line) for us.”

Maxx Crosby has been a menace along the edge, making life easier for Ngakoue on the other side, and the two have become one of the best pass-rushing duos in the league. As long as Ngakoue remains healthy, there is every reason to believe that the Raider defense is here to stay for the rest of the year.