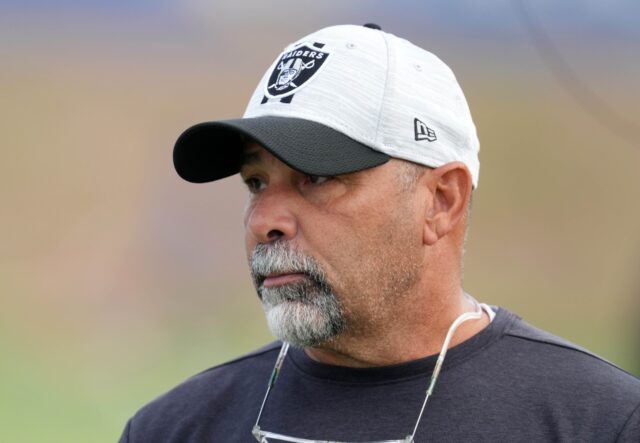 When Jon Gruden’s emails were leaked, it was a foregone conclusion that he and the Las Vegas Raiders’ partnership would end.

Gruden made the decision to step down from his role as head coach and in his place, the organization decided to make assistant head coach and special teams coordinator Rich Bisaccia the interim head coach. Bisaccia has decades of experience as an assistant but has never been a head coach at the professional level.

Although this is Bisaccia’s first stint as a head coach in any capacity at the NFL level, he has several assistants like Tom Cable, Gus Bradley, and Rod Marinelli who he can lean on.

“Yeah and then Richard Smith has been a defensive coordinator and Edgar Bennett has been an offensive coordinator and so I think that the unique thing about all those men from my perspective is they have no personal agenda,” Bisaccia said. “They have no ego. They understand it’s collective, and I think that’s what makes the players at ease a little bit to understand we are all really trying to do this thing together.”

It was an emotional and tumultuous week for the Raiders given Gruden’s departure and how involved he was with the franchise, but so far Bisaccia has been able to keep the team together. As he alluded to, it is going to take a collective effort on the coaching staff to keep the Raiders afloat through such an abrupt transitionary period, but fortunately, most of the men on staff have been in head coaching spots before and understand what it takes to accomplish that goal.

Things have gotten off to as good of a start as possible as the Silver and Black were able to put things behind them and pick up a win against the rival Denver Broncos. Hopefully, Bisaccia and the rest of the staff are able to keep things going.