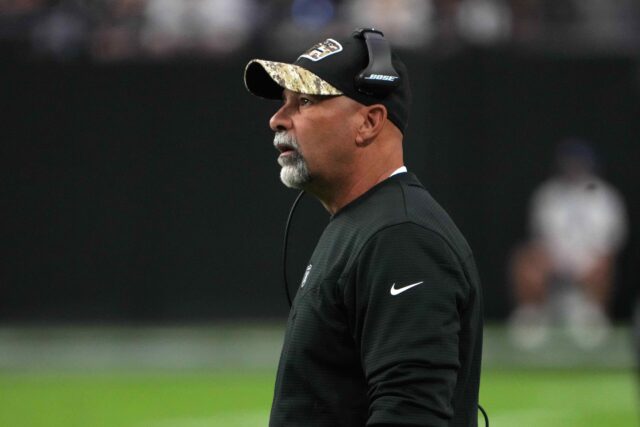 The Las Vegas Raiders have now lost three consecutive games since their 5-2 start to the season. There was some hope of a bounce back after a primetime loss to the Kansas City Chiefs, but instead, the Raiders suffered another blowout loss, this one a 32-13 result against the Cincinnati Bengals.

Raiders interim head coach Rich Bisaccia has dealt with more external drama than any interim in recent memory. And while that’s not an excuse for the team’s poor play, it can help to explain what has caused the on-field dysfunction.

Even through the bad losses, Bisaccia credited his team for fighting, saying that their fight has helped to reveal the soul of the team, according to Paul Gutierrez of ESPN:

#Raiders Bisaccia: We’ve been fighting. Fighting, to me, comes from the soul. The heart of the man.

Things certainly look bleak for the Raiders, especially with road games against the Dallas Cowboys and Chiefs coming up in two of their next three games. However, they can take solace in the fact that they’re far from out of the playoff hunt.

They currently sit just one game back of the Buffalo Bills, Benagls, and L.A. Chargers, all of whom are tied with the No. 5-7 seeds in the AFC. If the fight that Bisaccia is discussing can turn into results, they can quickly get their season back on track.

Beating the Cowboys would be the best way to start that return to the playoff picture, even if it is a difficult task. Dallas is coming off of a bad loss of their own against the Chiefs, and will be very motivated to grab a win and keep their stranglehold atop the NFC East.

A loss in Dallas would set them back yet again, potentially putting them two games back of a playoff spot.

Raiders QB Derek Carr is not one to shy away from voicing his displeasure. He did exactly that after the team suffered their third straight loss, holding nothing back when discussing the state of the team.

He said that as a fan of the Raiders for the last 20 years, he is fed up with all the losing, and that the team better figure things out quickly.