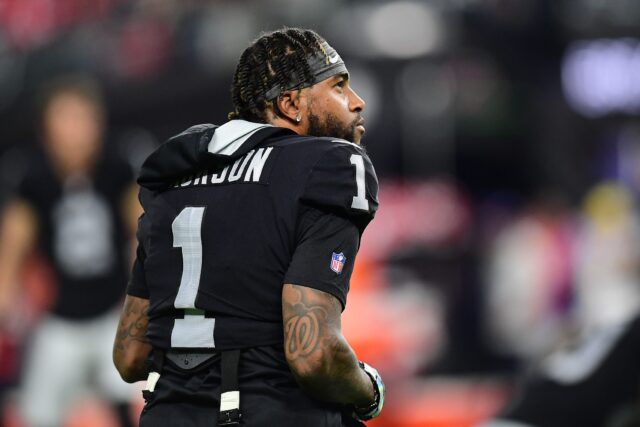 After a couple of disappointing weeks, the Las Vegas Raiders offense has its work cut out for them as they try to find their footing again.

The Raiders managed to only score 14 points in their loss to the Kansas City Chiefs, which is not a great look considering how good they looked to start the 2021 season. After releasing Henry Ruggs, they lost a major deep threat option and tried to mitigate the void by picking up DeSean Jackson after he and the Los Angeles Rams parted ways.

Jackson made his Raiders debut against the Chiefs but played sparingly, only appearing on nine snaps. The veteran receiver did haul in his only target, a 38-yard deep ball that he eventually fumbled away. However, interim head coach Rich Bisaccia said that Jackson is already getting acclimated to the offense. “We were walking down the hall and him and I were talking smack to each other, and he said, ‘Coach, I’m feeling more comfortable now. I’m feeling more comfortable.’

“So, I think that’s a good sign. I think those guys on offense, Oly [Greg Olson] and certainly Edgar [Bennett] and Nick [Holz] have done a great job with him. He’s been a quick study. He’s been around a long time and he’s a really bright guy. So, I think he’s done a good job to get himself where we can hopefully get more looks from him. We’ll be excited to see him play.”

Jackson getting more acclimated is a positive sign for Las Vegas as the speedy wideout has shown he still has some gas left in the tank. Of course, health has always been the concern for Jackson, but so far, he has managed to stay injury-free and should be a valuable contributor for the Silver and Black down the stretch run.