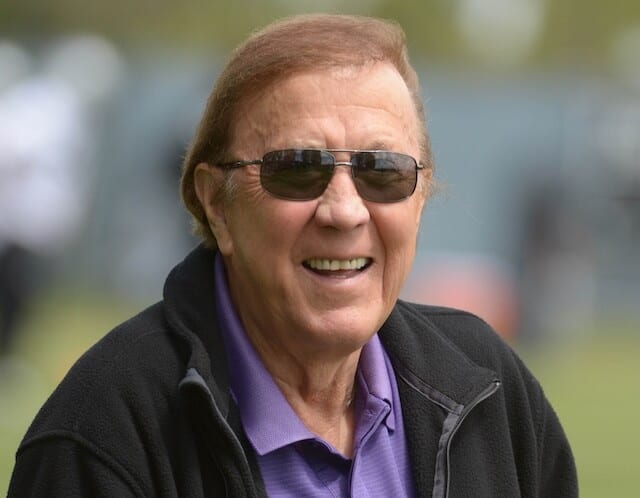 The Las Vegas Raiders will see one of their own go into the Pro Football Hall of Fame, with the legendary Tom Flores set to be inducted on Aug 8.

The honor is long overdue for Flores, who had been snubbed by the committee to be enshrined in Canton since being eligible in the late 1990s. After all, he was a trailblazer established himself as a trailblazer as the first Mexican-American starting quarterback and head coach.

Flores won four Super Bowls as both a player and a coach during an illustrious career. Although it may have taken longer than it should have, the 83-year-old will finally receive his flowers.

Flores admits that despite the delayed induction, he is happy to see it finally come to fruition, via Bill Williamson of Silver and Black Pride:

“I was kind of expecting it sooner, but it didn’t happen and then I got skeptical and I got a little guarded … When (HOF president David) Baker came to my house, I got tears in my eyes. I have tears in my eyes now just thinking about it. I said ‘Oh man, it happened.’ When you make the Hall of Fame, it’s not just you. It’s your family and your coaches and your players. We all made it together.”

Flores’ efforts helped pave the way for countless minority coaches and players. However, he was always focused on letting the work speak for itself.

“I never thought about my ethnic background. It doesn’t matter what your color is, you have to be ready to perform and win or you’re going to be an unemployed whatever color person you are … I was able to win and establish myself and now, here I am.”

Flores also spoke on what it means to be another Raider going into the Hall of Fame.

“We were a pretty tight family. The Raider Nation is a family, a very powerful family. We believe in each other and like being the underdog and our orneriness. Little by little, it became our way of life.”

The Raiders have long been at the forefront of some of the game’s biggest changes. Their approach has helped them form a rich tradition of legendary figures both on and off the field.

There is no question that Flores managed to make his mark on not only the franchise but the NFL as a whole, and he is finally receiving his due for it.