Offensive guard Denzelle Good is coming off a year that saw him miss every remaining game after tearing his ACL in Week 1 of the 2021 NFL season. Now, as he was scheduled to head into the last year of his contract, Good has agreed to a reworked contract for this season with the Raiders, according to Field Yates of ESPN. 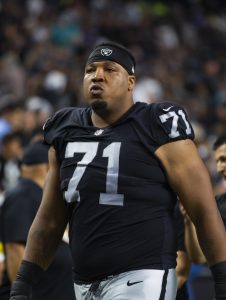 In the second and final year of the two-year deal he signed before last season, Good was scheduled to have a base salary of $3.09MM. In the new one-year contract meant to replace that final year, Las Vegas is set to pay Good a base salary of almost $1.04MM with a possible $425,000 available in incentives. The reduced salary is likely a reflection of his injury and could be an influence on future discussions once this contract year is over.

Before missing almost all of last year, Good had solidified his role as one of the team’s starting guards, starting 14 of the 15 games he appeared in during the 2020 season. Before that Good had been an intermittent starter since the Colts selected him in the seventh round in 2015. Despite recovering from his injury, Good is one of two players on the Raiders’ offensive line that is assumed to have a starting role locked down.

Good has been medically cleared and will be a participant when Las Vegas starts training camp on Thursday. He’ll look to have a bounce back year and show he’s fully recovered as he heads towards free agency.