The Raiders are down a running back. Peyton Barber has been diagnosed with mild turf toe, reports NFL Network’s Ian Rapoport (via Twitter). 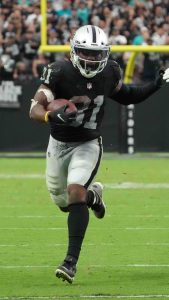 While the injury should sideline Barber for a “few weeks,” the veteran was fortunate to avoid a fracture. Barber is still “seeking opinions and having tests,” and it sounds like the organization will wait for those results before deciding on an IR stint.

Josh Jacobs has been limited to only two games and 29 touches this season, but Barber has done a fine job filling in (alongside free agent acquisition Kenyan Drake). Barber was a standout during the Raiders Week 3 win over the Dolphins, compiling 142 yards from scrimmage and one touchdown. However, the 27-year-old was limited to only one touch on Monday with Jacobs back in the lineup.

While Barber could be out for a bit, the team will soon be welcoming back another running back. The Raiders designated Jalen Richard for return last week.