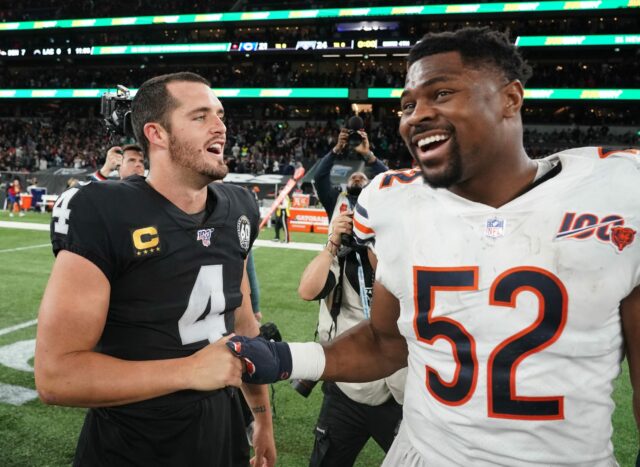 Back in 2018, the then-Oakland Raiders drastically shook things up with their roster and coaching staff. The team finally convinced Jon Gruden to return as head coach, and he had some plans for an already talented roster.

Gruden made some seriously questionable moves to start his second stint with the Raiders as he proceeded to trade two of the team’s best players. He dealt Khalil Mack to the Chicago Bears and Amari Cooper to the Dallas Cowboys, which left many people scratching their heads.

Apparently, Gruden and company tried to make up for what has been perceived as a mistake parting ways with Mack. The Raiders attempted to engaged the Bears in trade talks to bring him back before ultimately signing Yannick Ngakoue in NFL free agency, according to Vic Tafur of The Athletic.

The Raiders have had a glaring need for a proven pass rusher since trading Mack to the Chicago Bears nearly three years ago and when free agency opened in March, they targeted and planned to sign Yannick Ngakoue.

But before they did, they made a phone call, league sources said.

Would the Bears be interested at all in trading Mack back to the Raiders?

The Bears had significant salary-cap issues — which forced them to release All-Pro cornerback Kyle Fuller and restructure several contracts — and the Raiders thought it was worth a shot. The Bears were not interested, sources said, and the Raiders went ahead and signed Ngakoue to a two-year, $26 million contract.

Although the Bears have had limited success even with Mack in the fold, the former Defensive Player of the Year is still considered among the league’s elite players on that side of the football.

If the Raiders were able to somehow convince the Bears to make the move, Raiders fans would’ve been ecstatic as the defense has suffered ever since he left. Ngakoue is a considerable upgrade for Las Vegas, but Mack would’ve won over the fans immediately while also making star quarterback Derek Carr happy, who is a close friend of the four-time All-Pro.