The Raiders played another close game on Sunday, but for the third time this season, it didn’t matter much in the end.

Las Vegas lost to the Titans, 24-22, after trailing 24-10 at halftime, and the Raiders’ record fell to a dismal 0-3. Coach Josh McDaniels has yet to win with his new club, and a campaign filled with offseason promise appears to have hit a wall.

As always, some players had a better day than others. Here are the winners and losers from another disappointing loss.

Raiders wide receiver Mack Hollins had a career day, racking up an incredible 158 yards and one touchdown on eight catches. His stunning performance included a 48-yard bomb from quarterback Derek Carr on a do-or-die 4th-and-15 play on Las Vegas’ last drive of the game.

@mackhollins with the first down

Hollins finished the drive with his touchdown grab, but a 2-point conversion try, on a pass from Carr to tight end Darren Waller, was tipped at the line and fell short.

But Hollins’ day was huge by any measure, especially considering his previous career-high for receiving yards was 72. He also had a key special teams play, pinning the Titans back at their own 2-yard line late in the third quarter.

Raiders running back Josh Jacobs battled an illness that kept him from flying to Nashville with the rest of the team, but he played against the Titans and played well. Jacobs had just 66 yards on the ground but needed only 13 carries.

Jacobs added five catches for 31 yards. He showed grit and talent that McDaniels should reward with more touches. The Raiders offensive line has struggled in general, but they look okay as run blockers. A more balanced attack will keep the defense from gunning for Carr on every snap.

For the second straight week, safety Duron Harmon earns a spot on the winner list. This time, he had what appeared to be a momentum-changing interception in the third quarter, just after the Raiders scored a field goal on their first drive of the second half.

.@dharm32 got what he wanted

Carr promptly found Waller for a long pass completion, and it looked like the Raiders would have the ball at the Titans’ 2-yard line. But a penalty on Las Vegas wiped the play out, and the Raiders’ drive went backward, ending in a disappointing punt.

It was offensive lineman Jermaine Eluemunor who had a holding penalty on Waller’s catch, and Carr and the offense followed that up with a delay of game penalty.

Eluemunor gets called out on the loser list, but his fellow offensive linemen had another suspect day protecting Carr and their share of infractions as well. Offensive tackle Kolton Miller had a false start in the red zone, and guard Alex Bars had an unsportsmanlike conduct penalty after a 60-yard haul from Hollins, contributing to the Raiders settling for yet another field goal.

Over the offseason, the reunion of Carr and wide receiver Davante Adams was all the rage. Now, the team they were supposed to lead to the playoffs has an 0-3 record.

Carr had a solid day statistically and made some incredible throws, mostly to Hollins. But time and again in the red zone, he tallied one incomplete pass after another. He had some bad luck too, like his interception near the goal line that bounced off Waller’s hands. The pass could have been better, or perhaps not attempted at all, but Waller’s mitts were on the ball.

But Carr has to improve in the red zone, and he didn’t get the job done on Sunday in a crucial game.

As for Adams, he had just five catches for 32 yards, though he did have a touchdown reception. But Adams, Carr, and the offense have a lot of work to do — offensive line certainly included — for Adams to have the superstar impact he’s used to.

The Raiders defense held the Titans scoreless in the second half, providing Las Vegas with an opportunity for victory. But as the Titans amassed their lead, their offense had it too easy because of a lack of pass rush from the Raiders.

Defensive end Maxx Crosby broke through for a strip-sack in the second half, but it was the Raiders’ only sack of the day, as high-priced free-agent EDGE Chandler Jones had a minimal impact.

McDaniels’ running mate, general manager Dave Ziegler, bears responsibility, too. Despite headline talent, the Raiders look soft in the middle, especially on the offensive line. It was no secret the unit needed improvement in the offseason but it received none.

Instead, the Raiders threw a hail mary in acquiring Adams and Jones. For now, Las Vegas’ star-studded playoff aspirations must be put to the side. First, they have to win a single ballgame. The Raiders have another chance to do so in their Week 4 matchup against the Broncos at Allegiant Stadium.

Best images from Raiders in Week 2 vs. Cardinals 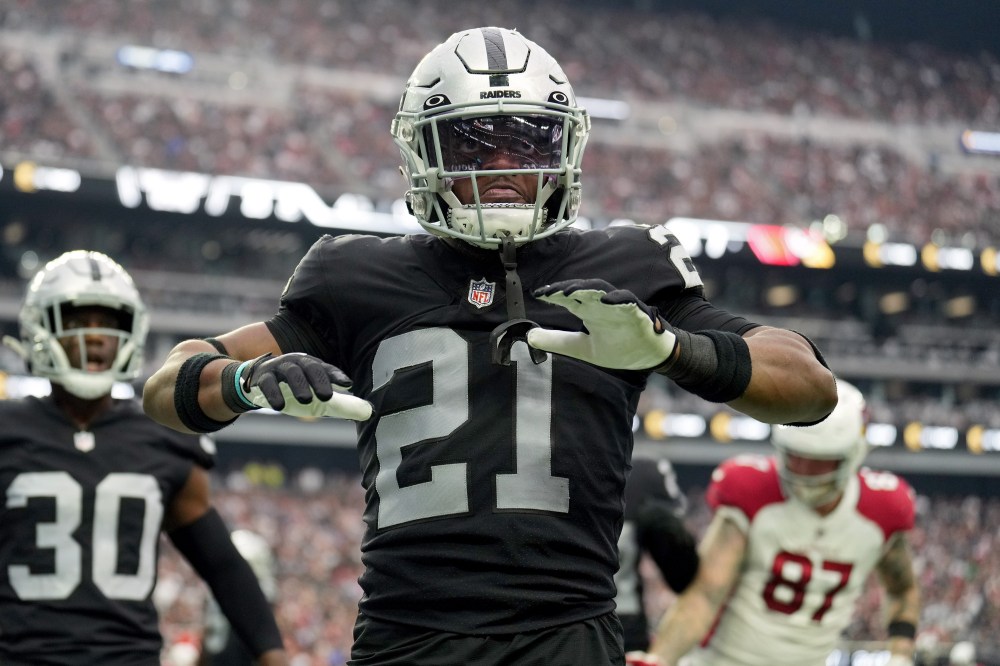