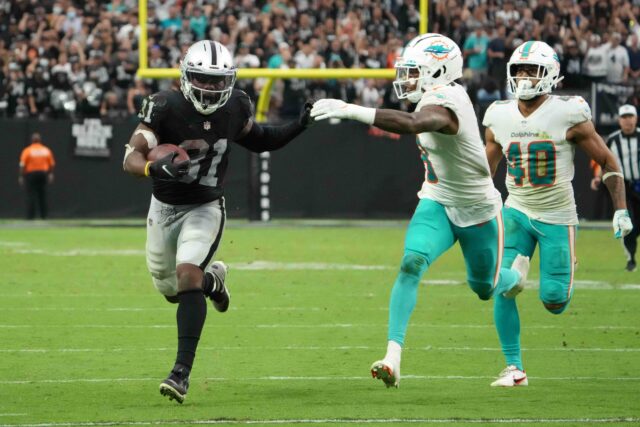 When Josh Jacobs went down with a toe/ankle injury, the Las Vegas Raiders had to be worried that their run game would take a severe dip.

Although the Raiders had a quality backup in Kenyan Drake, head coach Jon Gruden instead turned toward veteran back Peyton Barber to fill the void. Barber a minimal role in their Week 2 win against the Pittsburgh Steelers, turning 13 rushing attempts into 32 yards. However, Barber was heavily featured the following week in their thrilling overtime win against the Miami Dolphins. He rushed 23 times for 111 yards and a touchdown and added three receptions for 31 yards.

Jacobs was fortunately active for their Week 4 tilt against the Los Angeles Chargers, but Barber was forced out of the game early due to an apparent foot injury. According to Ian Rapoport of NFL Network, Las Vegas could now be without Barber for an extended period of time:

#Raiders RB Peyton Barber, who has impressed filling in for Josh Jacobs, was diagnosed with mild turf toe, sources say. No fracture. He’s still seeking opinions and having tests, but sounds like a few weeks on the sidelines as of now.

It is an unfortunate situation for Barber, who looked like he had carved out a legitimate role in the offense, and Las Vegas must now determine whether or not he will go on injured reserve. The Raiders already had Jalen Richard on injured reserve, though the pass-catching specialist should make his return soon.

However, the encouraging sign for the Raiders is that Jacobs was able to handle a fairly heavy workload in his return, rushing for 40 yards on 13 attempts plus hauling in all five of his targets for 17 yards. So even though he might not be 100 percent healthy, the Silver and Black might have no choice but to lean on their workhorse for the foreseeable future.

The post Raiders News: Peyton Barber Dealing With Turf Toe, Could Be Out A Few Weeks appeared first on Raiders Newswire.