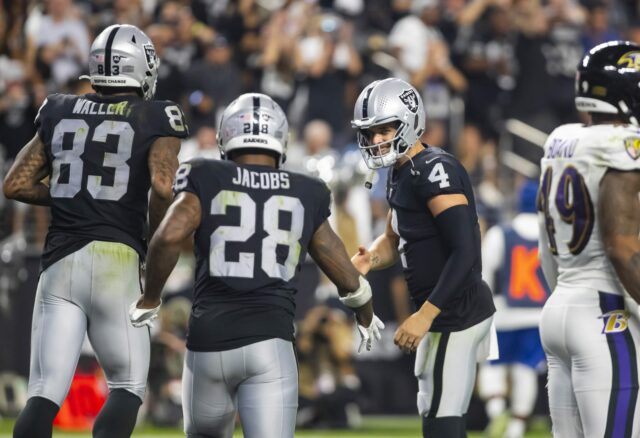 The Las Vegas Raiders are now full steam ahead, with Rich Bisaccia as their head coach for the remainder of the season. After Jon Gruden resigned in the midst of a decade-long email scandal, the Raiders are simply going to try and move forward with what they have.

Their first test comes in the form of division rivals, the Denver Broncos. Both teams have lost two straight after starting the season 3-0, and a win would go a long way towards salvaging the remainder of the season and potentially earning a playoff berth.

Bisaccia spoke about what fans can expect from his team on Sunday and moving forward. “I guess we will have to wait and see the game,” Bisaccia said. “Like I said, we have a good team. We have high expectations. We have high standards.”

“We were 3-0 at one time. We’ve lost two games, so there is a bump in the road. It’s not the end of the road and we’re just going to put our heads together and put the players in the best position they can to win a game and we’ll see what happens on Sunday.”

While Bisaccia obviously doesn’t want to give away too much about his gameplan, he appears reluctant to divulge any information. This likely isn’t due to a lack of plan, but rather a possibility that the team is still figuring out how they want to approach this week.

To lose a coach unexpectedly in the middle of the season is a difficult thing to adjust to. It may take some time before the team is fully ready to compete. However, with a chance to move to 4-2 and improve their divisional record on the line, winning may be vital this Sunday.

Following the surprise resignation of Gruden, Raiders QB Derek Carr was asked to explain how he was feeling about the tumultuous situation. He responded by saying that he hated what Gruden did, but has grown a strong bond with the former coach over the years.

He said that he will never lose love for anyone that does something wrong, but that he still didn’t like Gruden’s actions.